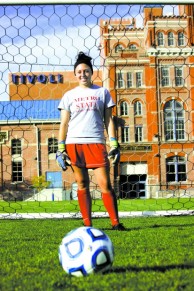 Nicole Jablonski isn’t big physically. At only 5 feet 5 inches, she doesn’t take up much of the net, but this freshman goalie can play big.

The four-year letter winner from Walled Lake Northern High School in Commerce, Mich. is a two-time all-conference and all-district player. As team captain, she was part of city champion teams her junior and senior years, and division champions as a senior.

Jablonski had nine shutouts as a junior and eight as a senior. Before leading her Vardar Michigan U17 team to the Elite Clubs National League Elite 8, where she met Metro women’s soccer head coach Adrianne Pietz, Jablonski didn’t consider Colorado or Division II.

“This was actually the only Division II school I considered,” Jablonski said. “The team was really successful when I was looking at them, and they still are, so that was another big reason I wanted to come here.”

Jablonski said her love for the game came at a young age, starting out at midfield and forward, but she found her success in the net while in middle school.

“I like making big saves,” Jablonski said. “How other players feel when they score a big goal, that’s how I feel when I make a big save — that kept me in it.”

Being a leader is part of the goalie’s job, and the 18-year-old is comfortable with that, even as she settles into the Division II level of play.
“They expect you to talk in the back and lead by directing, and over the years I have learned what works and what doesn’t,” Jablonski said confidently. “It was a little intimidating at first, but the team was pretty good at bringing me into it.”

Pietz said she is pleased with how Jablonski has done this season and with her contribution to the team.

“I think for her, it’s hard to come in as a freshman and play at a high level right away, but she’s done a good job,” Pietz said.

“She’s a confident goalkeeper, she has a great work ethic, and I think she continually improves on the things she needs to improve upon.”

Coming into the season, Jablonski said that she is happy with how things have worked out.

“I just expected to get some play time in and do my best,” Jablonski said. “I was pretty lucky to start as many games as I did. It was a surprise to me and I am happy with how I came in.”

Jablonski has no delusions about staying in the starting lineup, especially with fellow freshman Karisa Fernandez on the roster.

“Karisa is really good, so we are both constantly trying to get each other to play better at practice and on the field,” Jablonski said.

In talking about Jablonski’s future on the team, Pietz only had positive things to say.

“She has a tremendous work ethic, and I think she is going to continue to improve,” Pietz said. “Regardless of who’s starting a game, I feel like they are both being supportive of each other, and in there pushing each other to be the best they can be for this team.”